The Poole and East Dorset Herald newspaper of 7 September 1916 carried an editorial headed ‘Poole Girls: The Best’ about the need for women munition workers at Holton Heath and especially those from Poole. A Culture volunteer on the Poole History Centre First World War project has been exploring various sources, including the local newspaper, to discover what life was like for women munition workers.

Lord Northcliffe, owner of several major newspapers, blamed the death of his nephew on the lack of artillery shells on the Western Front. A newspaper campaign led to the creation of the Ministry of Munitions and an expansion in the number of munition factories. Holton Heath was chosen because it was close to a railway line, was near Poole Harbour for sea transport, and was relatively flat with a few ‘hills’ for the gravity transfer of certain materials. 1915 saw intense activity as heathland was transformed into the Royal Naval Cordite Factory which opened in January 1916 and at its height employed around 4,000, half of them women.

With men needed for the armed services it meant that women were now in demand for jobs that, ordinarily, would have been denied them. However, while the Ministry of Munitions worked hard to promote a positive image of women in its factories, the other Ministries played down their contribution over fears of demands for equal pay. Throughout the war there was an ambivalent attitude towards women workers which moved between actual hostility and an acceptance of change. The local newspaper reported early in 1918 that prior to 1914, the ‘majority of women enter industrial occupations merely as a stop-gap between schooldays and marriage’. The article expected that with 1.5 million women having entered the workplace since 1914 this would change when the war eventually ended.

Women worked in the factories for many reasons; the independence which came from having a wage, better pay, a feeling of wanting to contribute to the war effort, or because of the death of a family member in the war. A survey in 1918 found that the percentage of under-nourished children in London was less than half that in 1913. It is believed that one reason was that women now had control over the pay packet.

Reporting of the work at Holton Heath was covered by many restrictions because of the Defence of the Realm Act. A visit by Poole councillors in September 1916 was only able to describe the hospital and first-rate ‘washing and eating departments’ for women. It was noted that a good lunch was available for 7d – for many women, a canteen meal enabled them to have a regular, proper meal for the first time.

The Poole councillors visit described the work as of ‘congenial character’ which glossed over its dangerous nature. There was a high risk of fire from flammable solvents, vats spewed out acrid choking fumes, there were high levels of dust, and some of the chemicals caused skin rashes and even turned the skin yellow.

Not surprisingly, advertisers were quick to take advantage of the conditions. ‘How women workers can increase strength’ was the headline for an advert of 1918 in the local newspaper. It was claimed that after ‘long hours of hard, nerve-racking work in our munition factories’ Bitro-phosphate tablets were important in helping to maintain a strong nervous system. Another advert claimed that ‘Sanitas’ would cure the sore throats of munition workers. In contrast, a cup of Rowntree’s cocoa was advertised as helping women in the workplace by turning ‘a biscuit into a meal’ and the advertising campaign featured women in a series of jobs.

The starting wage for women at Holton Heath was 20/- (£1) a week. The local newspaper reported that Bournemouth Labour Exchange and Ministry officials were encouraging girls to go to the factory at Woolwich with the prospect of higher pay. The Mayor of Poole had written strongly against this and expressed hopes they would not leave Poole. Captain Desborough, Superintendent of Holton Heath, intended to have the pay increased because he said that Poole girls were better at the work than elsewhere.

As mentioned before, there was an ambivalent attitude towards munitionettes. They were praised for working for their country at a time of great conflict; ‘who works, fights’ was the rallying cry of David Lloyd George. However, a woman who saw a group of munitionettes at a railway station described them as:

‘a couple of hundred, dehumanized females, Amazonian beings bereft of reason or feeling, judging by the set of their faces, bereft of all charm of appearance, clothed anyhow, skin stained a yellow-brown even to the roots of their dishevelled hair.’

[Quoted in Patricia Fara, ‘A Lab of One’s Own, Science and Suffrage in the First World War’, Oxford University Press]

There were concerns that the work environment would make women ‘masculine’ and even, as one man put it, ‘unlovable’. Some people were concerned that ‘the masculine dress has a psychological effect on the susceptible’.

Reporting restrictions on Holton Heath did not extend to the RNCF Carnival which was regularly held in Poole Park and attracted thousands of visitors. A mixture of entertainments included sport events for men and women. For example, the 1919 women’s tug-of-war final was won by the Gun Cotton Section who beat the Cordite Section 2-0. Interestingly, there were also women’s football matches and in 1917 the Nitroglycerine team defeated the Cordite team in the final. Professional and amateur football was severely curtailed which led to an interest in the women’s game. For example, a Munitionettes Cup was held in the North-East in front of thousands of spectators. 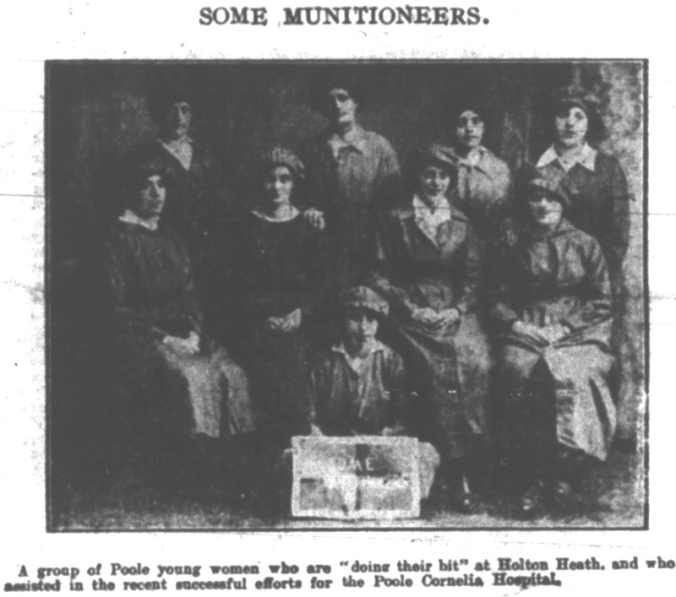 While the local newspaper praised the efforts of the munitionettes in 1916 only a year later it reported the commonly-held belief that they were so well-paid they were buying expensive clothes and jewellery. There was no evidence. They may have earned a better wage than elsewhere but they were still paid less than men doing the same work. A correspondent to the same newspaper was asking in January 1918 why women were being paid 25/- (£1.25) per week at Holton Heath compared to men who were receiving £4 plus a £1 war bonus.

Unions struggled to come to terms with the changing workplace. If a woman could do a job it was considered ‘unskilled’ and some employers used this as an opportunity to reduce wages. In 1915, a representative of the Railwayman’s Union expressed a view that women should receive the same wage as this would ‘safeguard the interests of the men’ when they return. Similarly, Newcastle tram workers said that women should be employed at the same wage as men but with the proviso that men would be ‘guaranteed reinstatement’ when the war ended. As early as January 1915, the Secretary of the Federation of Trade Unions had anticipated the problem that would happen when peace was declared. He said ‘if women are turned out, what is to become of them; and if they are allowed to remain, what is to become of the men.’ The newspaper went on to say that ‘in either event the social situation will be perplexing’.

And what did happen to the women after peace was declared? Cordite production at Holton Heath went from around 150 tons per week to 35 tons per week following the Armistice and many lost their jobs. The women who remained were put under a lot of pressure to leave. Millions of returning soldiers came back expecting to get a job and, not surprisingly, found it difficult. At a demonstration of unemployed ex-servicemen in Poole in 1920 it was said that women workers should leave places such as Holton Heath to become domestic servants so as to allow men to have a job. Only a year earlier, a visit by a scientific group to the works had praised the women for their ‘efficient and loyal service’.

The General Election of December 1918 was a landmark and for the first time women could vote – as long as they were over 30 and met certain occupancy conditions; it was another ten years before all women over 21 could vote. Those who got the vote were eager to use it and 73% of the electorate voted in the election of 1922 with the number being boosted by women voters

Although having the vote was a step-forward there was still a resistance to change and many female supervisors found their roles downgraded after the war. The experience of Isabel Emslie Hutton highlighted the experience of many women who, having achieved a senior role, were now faced with the reality of post-war. She had set up and run a major hospital in Serbia in difficult circumstances and was an excellent surgeon. She returned to Britain, struggled to find a job, and on marrying in 1921 had to resign from her basic post because she was now married and her husband was expected to support her.

A consequence of the Restoration of Pre-war Practices Bill to be introduced in Parliament in June 1919 with the aim of returning life to ‘normal’ would have been to make it illegal for women to be employed in engineering. Prior to 1914, trade unions had not allowed women to work in these trades. A newspaper article commented that if the Bill was passed as it stood it would be ‘a farcical anticlimax’ to deny women the opportunity to continue to do something for which, during the war, they had been praised. However, a Ministry of Labour leaflet of the time expressed a different view – ‘a call comes again to the women of Britain’… to sew, to mend, to cook, and to clean and to rear babies’.