A Culture volunteer on the Poole First World War project has looked at the articles in the Poole and East Dorset Herald newspaper to discover what schools were doing during the war. This ranged from practical, such as collecting acorns, to financial, through war savings.

Unrestricted submarine warfare led to the introduction of rationing because of the loss of a significant number of merchant ships carrying food. Schools throughout the country were asked to either create, or enlarge existing, gardens to grow food and, interestingly, medicinal plants. Nationally, 806 new school gardens were created.

Teachers were also encouraged to educate children in using food sources from the natural environment. For example, blackberry picking took on a new urgency. During the First World War, Dorset schools are believed to have collected around 91 tons to turn into jam. However, with sugar becoming in short supply from the end of 1917, it became increasingly difficult to obtain enough for jam making.

The natural environment was also used to provide material for commercial use. Scientists had developed a fermentation process that converted grain into acetone for use in cordite manufacture but the pressing need for food meant that an alternative to grain was needed. The Royal Naval Cordite Factory at Holton Heath had built a manufacturing facility for turning acorns into acetone but a huge quantity was needed and adverts were placed in newspapers encouraging people to help. The Ministry of Munitions asked that councils would permit schools to collect acorns and an official from Holton Heath visited Hamworthy School in October 1917 to encourage the schoolchildren.

Other schools in Poole were also active in foraging for acorns. It was reported in November 1917 that schoolchildren at Longfleet School had collected 3 ½ tons of acorns while pupils at Poole Secondary School had amassed 4 tons of acorns. The Mayoress of Poole, who was handing out prizes at the Secondary School’s awards ceremony, said she proposed to give an acorn-shaped item of jewellery to a pupil, Winnie Durant, because of the number of acorns she had collected. Broadstone Council School had gathered 100 bushels of acorns and 20 bushels of horse chestnuts (total weight 3 tons). George Aldridge was the star pupil having collected 2 ½ cwt. (Cwt = hundredweight, an old measure of weight).

The need for charcoal to be used as an absorbent in gas masks led to an appeal from the National Salvage Council for everyone to collect nut shells and fruits stones. These would then be converted into charcoal. The shortage was so acute, and the demand so great, that the Government considered importing charcoal from abroad. It was accepted that fruit was in short supply but it was hoped that hundreds of tons a week could be collected nationally. Schoolchildren were encouraged to collect as many as they could.

Eggs were in great demand from military hospitals in Britain and on the Western Front. In late 1914, a National Egg Collection was instituted which hoped to collect 200,000 eggs every week. There were around 1,000 depots throughout the country to receive them and transport by rail was free. The vast quantity of eggs donated shows how many people kept chickens at the time. Pupils at Heatherlands Boys School, Upper Parkstone collected around 300 eggs for soldiers who were in the Poole Red Cross Hospital when the school held a special ‘Egg Day’ in 1915.

The financial cost of the war was substantial. The War Budget in November 1914 raised income tax from 9d to 1s (5p) for every earned pound and from 1s 3d to 1s 8d (9p) on unearned income. Beer duty was increased from 7s 9d a barrel to 25s (£2.25p). Surprisingly, the duty on tea was also increased from 5d to 8d (4p) for a pound of tea.  A War Loan of £350,000,000 was to be issued which was only expected to fund the war until July 1915. There followed extensive advertising and encouragement to take up War Bonds and Savings Certificates and the entire community, including schools, was involved in raising funds.

Schools in Poole contributed in many different ways towards the war effort. A newspaper article in May 1917 reported on the activities of Hamworthy Schools. The Schools had sent 192 eggs to the National Egg Collection, collected £1 15s (£1.75p) for gifts for soldiers and sailors, and, since January 1917, the War Savings Association had subscribed nearly £105 from 114 members. At a prize-giving, each child who had a good attendance received six penny War Savings stamps which could be added to their Savings cards.

The Harvest Festival of South Road Girls’ School, Poole, in October 1914 had a war theme. The bunting with the colours of the Allied armies decorated the school and numerous hymns were sung followed by the National Anthems of the Allies. Needlework, fruit, vegetables, and fancy work were on sale with all the money going to the War Fund. Teachers and schoolchildren had already given knitted items for soldiers and the parents had provided clothing for refugees from Belgium.

One way of encouraging people to take up the savings needed to fund the war was to have towns and cities visited by the remarkable British invention – the tank. There was even a competition to see which place could raise the most per head of population who would then receive a tank as a gift. 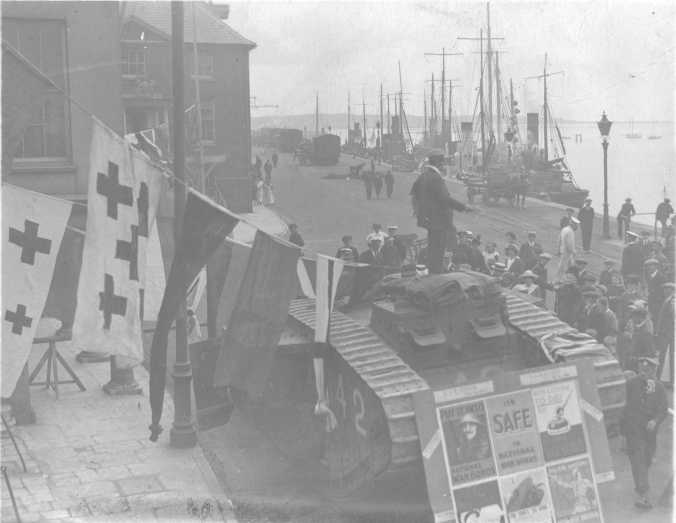 When the Tank was on Poole Quay

Schoolchildren at Poole Secondary School purchased 1,341 war savings certificates raising £1039 5s 6d during the Poole Tank Week. The local newspaper described their efforts as ‘most creditable and gratifying’. The tank visited various places in Poole, such as the Quay, Lower Parkstone, and Constitution Hill, to raise money for National War Bonds and War Savings Certificates – ‘the soundest and safest investment in the world’. The tank was on display in Poole Park on the Wednesday which was designated ‘Children’s Day’ and schoolchildren carried flags as they marched from their respective schools to the tank. Children who had paid their contribution to the School War Savings Association had their certificate stamped with a souvenir stamp. Music was also provided at the event.

For a while, the Poole and East Dorset Herald newspaper had a ‘Children’s Circle’ to which children were encouraged to send stories, jokes, riddles, and poetry. The following are two examples of poetry from October 1914 and the sentiments expressed are quite surprising given the age of the writers. 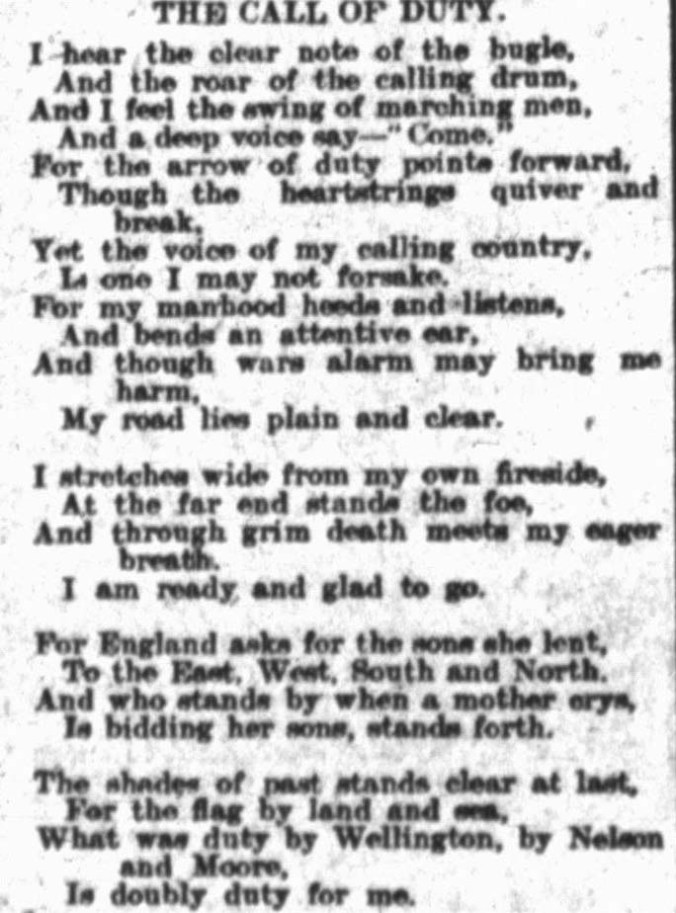 Nellie Brett was 11 when she wrote her poem. She lived at 16, East Street, Poole along with her mother, two brothers and three sisters. Nellie’s father, George Reuben Brett was a seaman most of his life and served in the Royal Naval Reserve.

He survived the war as did her brother, Frederick George, who was a tailor’s errand boy before also serving in the Royal Naval Reserve. Her poem was considered so good that it received a book as a prize. 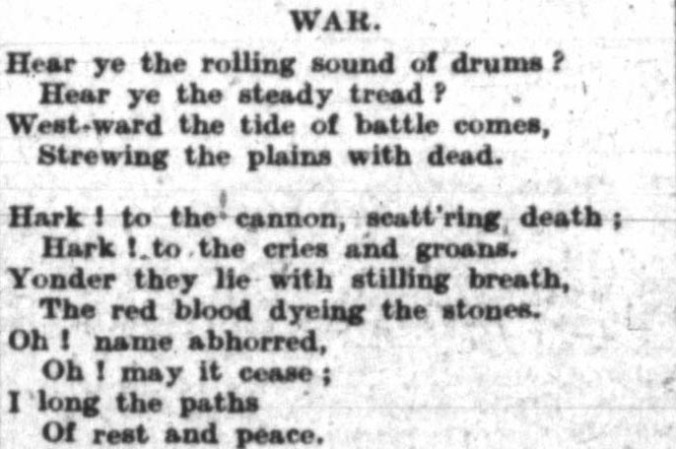 Alice Elgar was also 11 when she submitted her poem. She lived at 1, Perry Gardens Terrace, Poole and her father, Edward, was a fishtrader.

Perhaps a legacy of the First World War is the concept of volunteering. Schools were very involved. Local organisations, such as the Dorset Guild of Workers (see a previous post) did some amazing work. There are also unexpected surprises. For example, a letter from Lady Jellicoe, wife of Admiral Jellicoe, appeared in the Poole and East Dorset Herald. It said that the Royal Navy did not have enough blankets, warm clothing or oilskins for its sailors – please donate. In contrast, Miss Gladys Storey organised a charity that for over 5 years provided ‘hot’ Bovril for the troops on the Western Front from the beginning of the war and into 1919 for the troops in North Russia.

So why not do your bit? Poole Museum needs you! Contact the Museum for details on how to volunteer.