A Culture volunteer on the Poole History Centre First World War project outlines the history of the Women’s Army Auxiliary Corps (WAAC) and some of the women from Poole who served with the Corps. The National Archives has the personal records of some WAACs from Poole and these provide an interesting insight into the social history of the time.

Women took on an increasing number of roles during the war simply because so many men were need to fight. While the ‘traditional’ opportunities of voluntary work and nursing were acceptable it was with reluctance, and because of a desperate need, that women were employed in, for example, munitions work and engineering. There was an even greater reluctance to allow women into areas that could be considered ‘military’. There were many reasons for this including that it would weaken the argument against granting women the vote, it would lead to them becoming ‘masculine’, and that they would be ‘led astray’ by being amongst so many men. However, with the tragic loss of life at the front and the Government using the slogan that ‘every fit woman can release a fit man’ it was inevitable that jobs in military camps at home and abroad would be opened up.

The first organisation formed by the War Office was the Women’s Army Auxiliary Corps (WAAC) in 1917. Lord Derby, Minister of War, wanted ‘titled’ ladies to be in charge but was overruled by those who saw the need for a more professional approach.  Mona Chalmers Watson, a doctor, was appointed Chief Controller of the UK operations while Helen Gwynne-Vaughan, a lecturer in botany, was the equivalent in France. Both had experience of struggling to be accepted in their professions.

The Corps tended to recruit those who had experience in the roles they were to perform and, importantly, they were not enlisted, but enrolled, so were still civilians. This led to a ‘Catch-22’ situation. To perform their role in a professional manner they needed to carry out all aspects of training, including drill, but this led to accusations of adopting ‘mannish’ behaviour. However, if they didn’t train they were criticised for not being professional.

WAACs needed to wear a uniform to ensure they were recognised as members of the Corps but this drew criticism as some commentators believed only soldiers should wear khaki. The length of the skirt was also debated and it was decided that the lower hem could be 12in from the ground.  It was also argued that to maintain discipline there needed to be different ranks and insignia but, once again, the authorities were against anything obviously military so something ‘feminine’ was chosen – a ‘double rose’ was the equivalent in rank to a brigadier-general.

What, at the time, were considered to be ‘humorous’ postcards did not help attitudes towards the WAAC and rumours were spread of inappropriate behaviour. Several people were convicted under the Defence of the Realm Act for making unsubstantiated claims with fines ranging from £2 to £50. There was even a Government Commission of Enquiry that went to France in 1918 to investigate alleged wide-spread immoral conduct among the 6000 WAACs based at 29 camps and hostels. The Commission found ‘no justification’ for the ‘vague accusations’ that were proving distressing to those who returned on leave to the UK to face friends and families. The report outlined some of the sources of the rumours which it said included some of the men who had been displaced by WAACs and who expressed ‘jealousy and hostility’ towards them. The Commission concluded that ‘the nation has as much right to be proud of its women in the Auxiliary Force as of its men’.

At its height, the WAAC had nearly 60,000 members in roles such as in cookery, waitressing, administration and as drivers. Some became intelligence workers decoding German messages and went under the name ‘Hushwaacs’. Over a thousand worked with the American Expeditionary Force in its records departments. When Queen Mary became Commander-in-Chief in 1918 the Corps became known as the Queen Mary’s Army Auxiliary Corps. Several thousand QMAACs later became part of the Women’s Royal Air Force. The Corps closed on 27 September 1921 when its last members were demobbed.

An applicant was required to fill in a ‘Form of Enrolment in the Women’s Army Auxiliary Corps’ which covered personal details as well as expectations. One question asked whether the applicant was willing to work at home or abroad or only at home. For many women, this was the only opportunity they would have to travel. One WAAC described how only those over 21 were allowed to go to France, so she lied about her age. She found herself in the ‘unheroic monotony’ of working on a typewriter, but even that had its risks as her workplace was bombed.

The form also made sure the applicant understood the consequences of disciplinary action. For example, if a WAAC should ‘wilfully neglect to perform any of [her] duties…or delay performing them’ she could be imprisoned for up to 6 months, possibly with hard labour, or fined up to £100. If a WAAC was guilty of breach of contract the fine for a first offence was 2s 6d (12½ p) and a second 5s (25p).

The applicant was also required to provide at least two referees who were contacted by the Ministry of Labour, Employment Exchange to provide references as to her character and suitability for the role. There was also a medical report to be filled in which included ‘Declared Age’. Most questions were what we might expect but there were also some highly intrusive ones.

The following information is from the National Archives and is for WAAC/QMAACs who were born and lived in Poole and whose records have survived. Most records were lost in an air raid during the Second World War or were damaged by fire or water. The information is believed to be correct but there may be errors as much of it is handwritten and of varying legibility.

Blanche Churchill lived at the London Hotel, High Street, Poole and was 19 when she enrolled with the WAAC in August 1918. She applied to be a waitress because of her experience at the hotel and was willing to work at home or overseas. According to the records it seems she worked as a housemaid at a Royal Army Services Corps camp near Winchester. Like many others, her records also include a signed contract agreeing to extend her service with the QMAAC until 30 April 1920. The records include a ‘Requisition for free annual issue of clothing’ which detailed what she received on joining such as one frock coat, one pair of shoes and three collars. However, there were no hats or overalls in stock when the clothing was issued by the Quartermistress. She was discharged in late 1919. Interestingly, she applied for the British War and Victory Medals but was refused because, according to the official response, they were awarded only to members of the QMAAC who had served overseas before 11 November 1918. 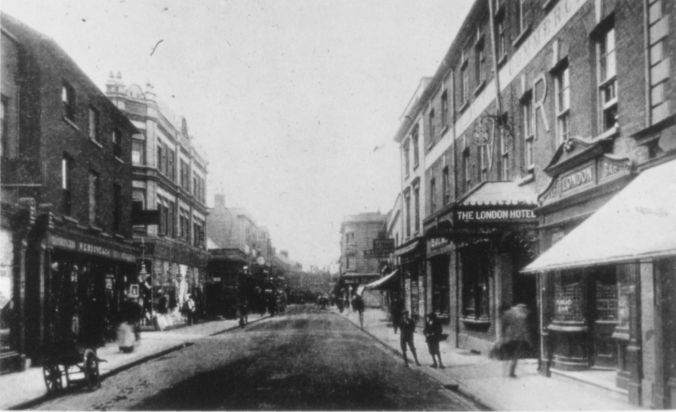 Sarah May Padley was 25 and lived at West Quay Road, Poole when she applied to join the WAAC as a general domestic/waitress. In her records, she said she left Poole Girls National School at 13. In 1914 she worked as a seasonal waitress at 10s (50p) per week; in 1915 she earned £18 per year as a housemaid/waitress. Her job prior to joining the WAAC was ‘gas repairer and meter reader’ for the Bournemouth Gas & Water Company at £1 per week. She was single when she applied in October 1917 but later records have her last name as Coleman so presumably she married. She was discharged on medical grounds in late 1918. It would appear she served in France as she received the British War and Victory Medals.

Edith L. Bond of Brook Road, Upper Parkstone was 18 when she joined the QMAAC in September 1918 as a pantrymaid. She was discharged on compassionate grounds in 1919.

Irene J.R. Eyles was living at Palmerston Road, Parkstone when, at the age of 23, she applied to the WAAC in May 1918 and expressed a wish to work at home or overseas. She went to France in June 1918 and was a waitress at the Directorates Camp, Aubergues(?) at £31/4/0 (£31.20) per annum. Her rank was ‘Worker’. She applied to be discharged in March 1919 because she had been offered a job as parlourmaid but withdrew the request in May. Following a return to England on leave she applied to be discharged in September 1919 on compassionate grounds which appear to be connected with her family. She was awarded the British War and Victory Medals.