A rarely mentioned aspect of the First World War is the huge amount of voluntary work that provided for the armed forces what we would assume was supplied as standard. A Culture volunteer on the Poole History Centre First World War project describes the activities of one such organisation, the Dorset Guild of Workers, which was based in Poole.

Lady Feodorovna Alington and Cornelia, Lady Wimborne started the East Dorset Guild of Workers from 20, Market Street, Poole. It was not long before it had grown to encompass Dorset with the majority of branches in Poole, but also as far afield as Dorchester and Sherborne. 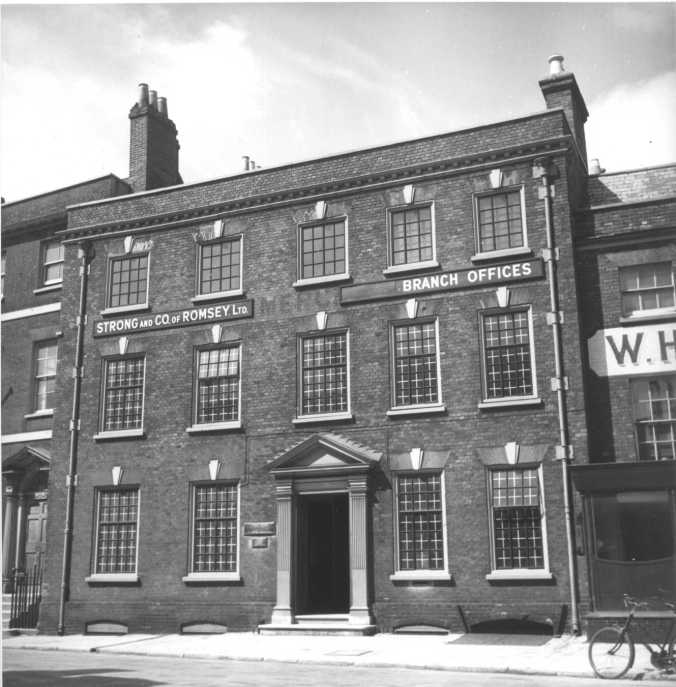 In a letter of 21 November 1914 to the local newspaper, Feodorovna Alington and Cornelia, Wimborne reported that the request in October for 1000 pairs of mittens (gloves) for the Dorset Territorial Reserves Battalion had been fulfilled. However, the letter went on to say that although they had supplied 4,000 hessian sleeping bags many thousands more were desperately needed. A startling comment was that ‘none of these things are supplied by the Government’.

The work of the Guild evolved as the war developed. Initially, there was a need to provide clothing and bedding for the tens of thousands of recruits and to help those at the various fronts. As the conflict moved into stalemate and its consequences, there were also additional demands to supply the burgeoning number of military hospitals and prisoners of war.

The Guild had two funds. The first was the General Fund, which as its name implies, supplied clothing and equipment where it was needed and the Prisoners of War Fund which was specifically aimed at providing food and clothing for Dorset Regiment prisoners of war. In June 1917, a view was expressed that if POWs in Germany did not receive food parcels from organisations such as the Dorset Guild ‘these men would starve’.

For a while, the Guild was the sole supplier for Dorset Regiment men in captivity and subscribers could ‘adopt’ a prisoner at 5s (25p) per week but this increased as the price of materials went up. It was only from 1 December 1917 that the War Office allowed ‘personal parcels’ to be sent to POWs by relatives – even then they could only be sent once a quarter and should weigh between 3 and 11lbs. The reason for the restrictions was because everything was delivered via the postal service and the system could easily be overwhelmed.

What did the Guild supply? In summary, clothing and medical supplies through the General Fund and food and clothing through the Prisoners of War Fund. Most of the knitted articles were made by groups of women but the Guild also accepted donations.

The reports in the Poole and East Dorset Herald newspaper during the war years record in incredible detail the number of items that were despatched and where they went. It was reported that between 29 January and 12 February 1917, 2591 items were received and 3894 items were despatched – the latter all by post. Although they were primarily for British troops and organisations there could also be an international element. The Romanian Government reported that they were desperately short of hospital supplies and the Guild despatched 30 roller bandages, 25 hospital flannel shirts, and 200 bandages to Romania.

At a meeting held at its headquarters at 20, Market Street it was reported that the Guild had received between 30 March – 2 April 1917 the following:

Lice were a serious problem and anti-vermin vests were tight fitting in attempt to stop them while multi-tail bandages were for chest wounds. The Guild supplied other medical supplies such as pneumonia vests, which were worn over the chest and often soaked in fat, and nightingales which were worn over the shoulder when in bed. Lady Smith Dorrien’s Hospital Bag Fund thanked the Guild for 100 hospital bags in September 1917 but requirements were expected to be 4,000 a day! Interestingly, other organisations, similar to the Dorset Guild, were criticised for producing what were deemed ‘fancy’ articles rather than useful.

As the conflict dragged on, what was made and despatched to the battle fronts depended on the time of year. In March, the request was for mosquito nets, sunshades and anti-vermin vests in anticipation of warmer weather, but from August it was for gloves and scarves. The mosquito nets had to be treated and the White House Laundry in Poole offered to do the work on the 3000 yards of netting being made by Guild workers.

How were the items supplied? They were despatched to ‘Comfort Pools’ at the various fronts. Officers of the various units contacted the officer in charge of the ‘Comfort Pool’ requesting the supply of various items which were then sent if available. While the Dorset Guild had a close association with the Dorset Regiment there were many new military units, such as the Labour Corps and the Machine Gun Corps, which had no specific organisation to look after their needs so that there were great demands on the ‘Comforts Pool’.

What was supplied was greatly appreciated. As well as official acknowledgements, such as from the Civil Service Rifles, the 10th Gloucesters and the 1st Coldstream Guards, postcards were often received from POWs saying their parcels had arrived.

An officer POW in Mesopotamia, who had received 100 mufflers, had reported ‘it is very cold now and if you could see the joy on the men’s faces when they received them’ would be ample reward for the Guild’s hard work.

A POW wrote in February 1917, after being exchanged and interned in Switzerland, to express his thanks for the parcels from the Dorset Guild which he had received when he was a POW in Germany. ‘Dorset soldiers receiving parcels from the Guild are well satisfied…it is a good parcel to look forward’.

Comments from other Dorset POWs said the parcels were ‘exceedingly good and I am very grateful’; ‘they come very nice, and regularly, but do want some soap badly’. One man was puzzled he had received no bread but was pleased with his parcels of boots and clothing. Supplies of bread were from a Central Committee and went via Copenhagen and it was believed that the problems were in Germany. Although an improvement was noted in March 1917, a year later it was said that the German postal system was working badly and that Austrian postal system had collapsed which affected affected parcels for POWs in Bulgaria and Turkey.

In November 1916, the Dorset Guild proposed to send to every Dorset Regiment man in captivity, as it had done the previous Christmas, a Christmas Pudding, preserved fruit, cigarettes etc. For 5s a donor could also have their name on the parcel so that the POW would know who had provided them with the gift. The Guild had hoped to send each man a blanket but, for various reasons, this was been prohibited. Also because ‘of the great stress of work in the Post Office at Christmas’ packages had to be despatched before December 10th.

A year later, Dorset POWs in Germany got a parcel containing ‘Christmas pudding, roast beef and potatoes, sausages, cheese, tea, jam, marmalade, crystallised ginger, curry powder and soap… 1/2lb of tobacco and a pipe’. It was hoped that adopters or relatives of the men would pay the cost of 10s but in any event a parcel would be sent. In January 1917, Dorset POWs in Germany were to receive a clothes parcel containing a vest, one shirt, one pair of pants, two pillows and a handkerchief.

A grim feature of the Guild’s adverts in the local newspaper was that often they recorded the number of Dorset Regiment prisoners of war. The advert for 1 March 1917 reported that in Germany there 370 POWs, in Turkey 319 (addresses not all known) and in Bulgaria 5.

The local newspaper report of the AGM held at the Guildhall, Poole, covering from September 1915 to September 30th 1916, goes into incredible detail about the activities of the Guild. The charity was now registered with the War Charities Act which came into being in 1916 – an important aspect was correct accounting presumably because of the dramatic increase in voluntary organisations. The Guild reported it was supplying the Dorsets in France as best it could but was uncertain about those in Mesopotamia. The Director General of Voluntary Organisations had informed the Guild that there would be an increasing need from Military Hospitals.

The report lists every organisation that had given money and these included the Parkstone Angling Society £5, Hamworthy Sewing Circle 15s (75p), and Oakdale School 12s 11d. Also recorded is expenditure with the highest being on wool (£325 10s 4d). Three parcels of food were being sent every fortnight to every Dorset Regiment prisoner – last year this cost 5/- (25p) and now cost 6/3 (31 1/2p) because of the rise in food prices. Individuals could adopt a prisoner of war.

Twenty-six branches submitted a report to the AGM. For example, the Poole & Parkstone Branch had made 295 articles and also picked sphagnum moss, while the Poole and Longfleet Circle had made 823 articles. It was noted that other places were helping out with the despatch of items because the demand was too great for Poole. For example, Dorchester was now handling parcels for Dorset POWs in Turkey.

There was no National Health Service and when a temporary Military Hospital opened it was voluntary organisations who supplied it. In 1917, the Guild provided supplies for the Springfield Hospital in Parkstone prior to its opening; the Torbay House and Parkstone Circles of the Guild were praised for the speed with which they had make curtains, chair covers and similar items. In 1917, the Guild was asked to supply Studland Hospital which was to open in April. In October 1917, the Guild received a request for 60 pyjamas that were ‘needed at once’ by the Dorset County Hospital. The Guild also supplied hospitals in other districts such as, for example, Streatham War Hospital, London who thanked them for supplies of sphagnum moss.

Fund raising was essential for the Guild which relied solely on donations. An advert for the Guilds ‘Great Fete’ in Poole Park 18 August 1917 made note that ‘Poole had a beautiful Park, with its advantages and attractions’ which should make the Fete a great success. So many demands were being placed on the Guild that in May 1917 the Committee had purchased £150 of goods ‘on credit’.

The end of the war did not mean the end of the Guild’s activities as there were prisoners of war waiting to be repatriated, millions of men waiting for demobilisation and an Army of Occupation in Germany, but it did mean that there was less pressure and the closure of the various groups began.

The local newspaper of 27 February 1919 reported that the Canford Cliffs Circle of the Guild had closed. It had begun in October 1914 with five members (Misses Grieg, Misses Putnam and Mrs McWilliams) and a wool order of £7 – in 1918 they had 172 members and a single order for wool was £180. The vast majority of members were women. In total, they raised £754 17s for the Prisoners of War Fund and £1075 12s 6d for the General Fund. They also made or provided a total of nearly 33,000 articles which were all taken to the Depot in Poole for despatch. Surprisingly, it also included 15,675 moss dressings and sacks of raw moss. Why sphagnum moss? It was used as surgical dressings with the moss being wrapped in butter cloth and the sphagnum moss around Canford Cliffs was of a type which was highly absorbent and, therefore, highly suitable for dressings.

The Dorset Guild of Workers closed at a General Meeting held on 29 April 1919. Over 200,000 articles had been donated or made for the troops and 50,000 parcels despatched to Dorset POWs. It was hoped that ‘for women workers there was a great future’ because of the varied work they had been involved which ranged from administration through to manufacture. It was also noted that the Dorset Guild of Workers had been considered as ‘the model of that kind of organisation in England.’

One thought on “Dorset Guild of Workers – A remarkable voluntary organisation”