The Treaty of Versailles ordered the surrender of the German U-boat fleet and, in several instances, the submarines were given to the Allies as part of compensation for the war. A Culture volunteer on the Poole History Centre First World War project describes the dramatic rescue off Poole of one such U-boat.

The ex-German U-boat U 143 was on its way from Portland to Japan when it became stuck on Hook Sands, which are near the entrance to Poole Harbour, in the early hours of January 8th 1919. It had a Japanese crew and was being accompanied by the Japanese destroyers ‘Kashiwa’ and ‘Kanran’. The submarine had approached the coast because it was having problems with its engines and found itself driven onto the sandbank during a gale. The destroyers were unable to get to the submarine because of their draught. For the same reason, the ‘White Oak’, a Portland naval drifter, was not able to help and assistance from the Poole lifeboat was requested by the Portland naval authorities.

Around 11 am on the 8th, the ‘White Oak’ went into Poole to tow the RNLI lifeboat ‘Harmar’, to Hook Sands. The ‘Harmar’ was 37 ½ feet long, was a self-righting lifeboat with twelve oars, and was the last sailing lifeboat stationed at Poole. It cost just over £1,000 – a legacy from the late George J. Harmar of Kensington, London. 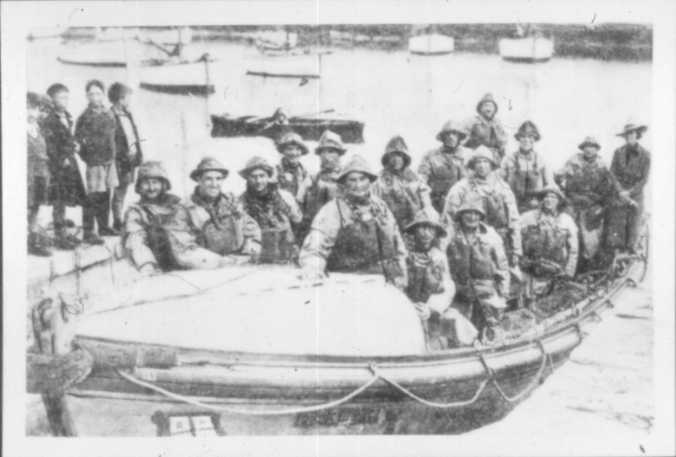 The ‘Harmar’ in the Lifeboat slipway, Fishermans Dock. Notice the lack of protection from the weather.

A high tide was beginning to raise the submarine off the sands but the sea was still running very heavily. In difficult conditions, the lifeboatmen were able to get towing wires onto the submarine and then pass them back to the ‘Commerce’, a tug which was helping in the rescue. However, the high tide passed with the submarine still stuck. The Japanese crew could not leave without orders and so the ‘Harmar’ had to remain on-station using the ‘Kanran’ to provide some protection from the rolling waves. Meanwhile the other destroyer had gone into Poole Harbour to have the hawser, which had been used to tow the U boat, removed from a propeller. The Mayor of Poole and Commander Ward of the Naval Base made an official visit to the destroyer a few days later.

The crew of the lifeboat had been on-station for around twelve hours when distress rockets were seen in the distance. The crew of the ‘Harmar’ raised its anchor and set sail to rescue the crew of the Antwerp schooner ‘Zwaluw’ which was perilously close to the shore. The crew of nine was taken off the schooner in a heavy sea.

The ‘Harmar’ arrived back in Poole at 3.30am on January 9th and the crew had a few hours rest before venturing out again. U 143 was found to be in a stable condition and so the lifeboat returned to base. Later in the day, the Japanese crew were given permission to leave the submarine so the ‘Harmar’ and its crew went out again at 1730. The navy drifter assisted by taking the ‘Harmar’ up to, and then from, the harbour. Twenty-eight crewmen of U 143 were taken off in two journeys to the Japanese destroyer which was in the harbour. It took several days before the submarine was eventually recovered and brought into Poole where it was found to have suffered little damage.

It is estimated that RNLI lifeboats rescued nearly 5,000 people during the First World War of which 1,600 are known to be directly as a result of the conflict. The rescues invariably took place in difficult circumstances and it should be remembered that lifeboats only had radio equipment installed after 1928. Up until then, contact with the shore was made by the firing of rockets which could be easily missed. The crew were, literally, on their own when a lifeboat was launched.